Ah, spring time, when a man’s fancy turns to love. Back in the spring of 1973 my riding buddy Rick had finally wore out his 1969 CT1 Yamaha, and was looking for love in the want ads of Cycle News. Rick wanted an open class machine that he could feel at home on, after all those years of eating dust on a 175. 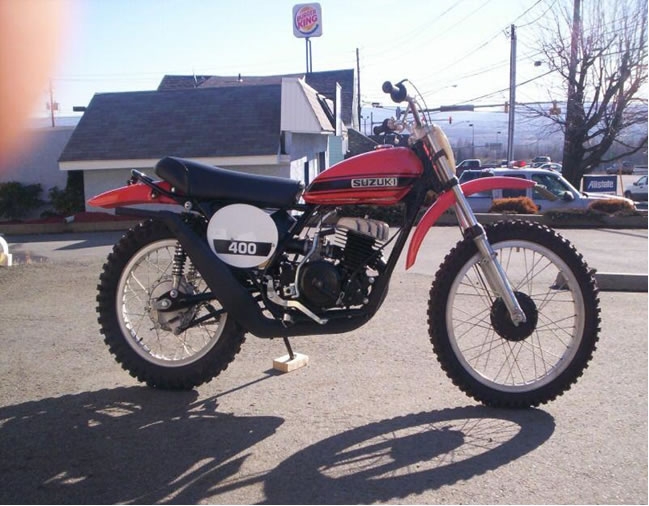 After a few minutes of looking, in the 1971 advertisement section of Cycle News in bold type was an ad for a slightly used 1971 TM400 Suzuki Cyclone for the unbelievable low price of five hundred dollars. We called up the seller who lived in Sylmar and quickly boogied on over in Rick’s 1963 F250 Ford pick-up with tie downs in hand. We heard stories of how fast and dangerous the bikes were, but poo-poohed these rumors as most likely from weaklings and turkeys that couldn’t handle the raw power of an open class machine.

When we pulled up to the tidy little house in Sylmar on San Fernando road, we were greeted at the front door, by a big guy with a giant cast on his right leg, and bandages on both elbows. He motioned us inside and closed the screen door behind us. “The bikes out back” he whispered. Why was he whispering, both Rick and I wondered? Maybe someone was asleep?

So we went out to the back yard and there it was, an orange and black 1971 TM400 Suzuki Cyclone sitting in the driveway. It was a very pretty bike, with the black motor, plastic fenders and alloy rims. Didn’t seem to have much wear and tear on it for a two-year-old dirt bike. The knobbies even had those little rubber whiskers on em. Seemed like it’d only been ridden a couple times, at most.

Rick walked around the bike and poked and prodded it in a few places, sat on it and bounced it up and down, you know, the standard bike buying dance. “Can I start it up?” Rick asked. To which the owner replied “Sure, you can take it down the alley out back too if you want.” The seller seemed agreeable, so Rick started it on the third kick, and carefully made his way to the alley behind the house.

The Cyclone sounded like a real race bike; exhaust crackling from its long black open stinger. Rick clicked it into gear, and was quickly down the alley in a haze of blue CCI smoke. When Rick got back, his eyes were as big as cue balls, and said to the seller “Jeezus this thing is fast, get the paperwork I’m buying it!”

As we loaded the Cyclone into Rick’s Ford, and the guy in plaster counted the $20.00 bills, I asked him how he broke his leg. He mumbled something under his breath that sounded like “you’ll find out” and limped back into his house. Another wimp, I thought, a non-hacker, trials bike material, mini-trail pilot. Weakling.

When we got the bike back to Rick’s house in the hilly section of Silverlake, Rick offered to let me ride the Cyclone up and own the street a few times, see what I thought about the machine. So I climbed aboard the Halloween-colored motorcycle and booted it to life. Ringgg—Ringgg—seemed to rev kinda quick like, oh well, stick it into first gear and….WHOOOEEEE! YIKES! CANCEL MY RHUMBA LESSONS! Man this is one fast sumbitch, I said to myself. I ripped up and down the street a few times and thought that the mighty Cyclone must be the fastest damn dirtbike I every straddled. Rick and I couldn’t wait for the weekend to get it out in the dirt. So we both called in sick the next day and made our way to a deserted El Mirage dry lake. A perfect place to test out a slightly used TM400, we thought. Turned out the only safe place to test a ’71 TM400 was in a desert made of foam rubber.

Rick was the first to get suited up and try out his new toy. We were parked on the dry lake, and the Cyclone ripped way from camp with authority, roosting chunks of the dry lake high into the clean desert air. Soon Rick was out of sight, making his way up to Shadow Mountain via a sandy whoop filled trail. He was gone for a long time, and when he finally made it back to camp, I noticed both he and the bike were bent and dirt colored in desert camo, a good indicator that he ate it big somewhere along the line.

Rick peeled the goggles from his dirt-encrusted face (even the insides of the goggles had dirt in ’em), and blew out a sigh of relief: “Phew, this thing’s fast…grab me a beer will ya?” “I think the swingarm or something is loose, handles kinda’ spooky, give it a try, slide it around a few bushes, tell me what you think? I’m gonna sit down for a while.” And with that he collapsed into a lawn char, with a kind of stunned expression on his face. Well, ol’ Rick must have lost his edge, let me try out this new sickle…and I suited up.

Again, the Cyclone started on the third kick, and sitting there in the saddle everything seemed real cozy. A few blips of the throttle indicated that not much mass resided in the lower end, so I made sure I fed a few more revs and slipped the clutch a little when I took off, didn’t want to stall it and look like a turkey. The bike pulled clean and hard through the gears on the dry lakebed. The front end seemed to be on the light side, so I positioned myself more towards the middle that I usually did.

Then it was off the dry lake into the mighty desert, where I was greeted with a long sandy whoop-filled road that on any other bike of the period was fourth and fifth gear all the way. The Cyclone was happy in third or fourth gear, since the damn thing was going sideways more than going forward. A few times I got into fifth, and scared the wee wee out of myself. Something must be loose back there in the swingarm, or the shocks must be blown.

I made my way back to camp, pretty wore out from a first ride. I needed a beer too, and slumped into a lawn chair next to Rick’s. We didn’t say much for the next twenty minutes or so, until Rick opened up: “Ya know, maybe the rear shocks are worn out, that’s the only reason I can think why it would jump sideways like that under power, or want to high side you without any warning.” I wanted to agree, but was too busy peeling blisters off my hands. We rode the Cyclone a couple times again that day, but at a more sedate pace. Which was almost impossible, since it seemed to want to rear-up at the least provocation, or tank slap crossing road berms. Some work had to be done on this one, we both agreed.

Since it was Rick’s bike and he was my dirt bike riding buddy, I got to see firsthand the modifications Rick made on that evil bike over the next year or so. A new swingarm, Konis, Betor forks off a Pursang. A new frame. More new shocks, Arnacos were supposed to be the hot set up, but worked worse than the stockers. Nothing really seemed to help that Orange and Black Cyclone much. It became known as the “Liquid Courage” machine, since you had to be zizzed on a few beers to even think of riding it. By that time I was riding a Bultaco, and pitied my old buddy Rick stuck on the terror bike, the Cyclone. Rick was very loyal though, and spent hundreds of dollars on that TM trying to make it right. It was like throwing money down a rat-hole.

Finally Rick had enough and put the Cyclone up for sale. A few days later some kid came by and bought the thing, without even riding it. Before the kid left, he shouted from his truck that the only thing that works was to get rid of the stock PEI ignition, and slap the magneto from the TS400 Enduro on it, made it a whole different motorcycle.

After the bike was long gone, far away from Rick’s house, I cracked a beer for both of us, and drew a little orange Cyclone on the plaster cast that covered Rick’s broken ankle. Good riddance.

Suzuki never really corrected the problems with the 1971 thru 1975 TM400 Cyclone, and made up for lost ground when the introduced the stellar RM370 in 1976.

There aren’t a lot of em left out there in used vintage bike land. But beware if you ever find one and want to race it. Make sure you have a good health insurance, and aren’t allergic to fiberglass. That’s what they make casts out of nowaday….