Change – apart from death and taxes, it is the one constant in our lives.  The inevitable, relentless inevitable that we all face and endure with little or no pre-warning of what it will bring.  That insidious driving force as struggling and fighting we are swept into the future and are dragged ever onward forward through life; loss of youth, the mundane eight hour day at work, marriage, divorce, aging.  Some change is welcome, like the personal epiphany of the discovery of dirt bikes for example.  Some change is cruel and unfeeling like the outlawing of works bikes or a death in a family. 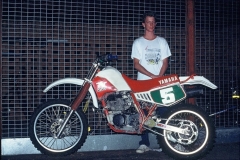 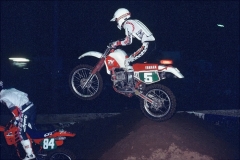 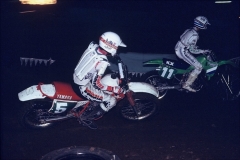 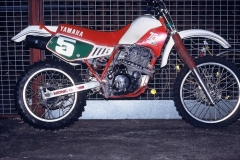 In vintage motocross it is inevitable that the old school will strongly resist change; what place have single shock bikes got in vintage racing some may ask?  But try as they will the greybeards will find it inevitable to halt the progress of evolution.  After all, when the old school ages ever onward to slowly fade into Motocross Valhalla who will replace them?  Who will carry the flame?  The winds of change continue to blow and the new-old school riders, those riders like myself who are still under fifty years old may not have even owned a twin shock bike in their youth.

When Andy Warhol stated that in the future everyone would have their fifteen minutes of fame he never mentioned that this fame could be relived; and yet that part of the life experience is almost as fun as the original fame.  Isn’t that part of the attraction of this vintage motocross thing?  Reliving old tales of glory with others both on and off the race track?

My most treasured fifteen minutes of fame occurred on the 10th October 1987 at the “Superbowl of Motocross” held at Archerfield stadium.  The faded program in front of me shows guest US riders Jeff Mataisevich, Jeff Glass and Eddie Warren were in attendance, as well as Jeff Leisk fresh off his first season in the States.  Leisk was on an ’88 YZ250 that had trick Ohlins forks and shock fitted to it, some change is good!

But I am getting ahead of myself.  In 1987 I was experiencing the poverty and mild starvation of a university student with my only means of transport being a well worn ’86 Yamaha TT250.  They weren’t a bad bike, the forks were certainly up to the task but the rear shock was hopelessly under-sprung and would bottom savagely over a dried dog turd.

I think my studies were secondary in my mind as a lot of lecture time was neglected in favour of flogging the old TT around in the wastelands beside the Brisbane River near Jindalee.  Even this mustn’t have satiated my desires as in my youthful naivety I entered that fine steed in the support class of the above mentioned Superbowl of Motocross.  I guess necessity was the mother of invention, and obsession certainly over-ruled insanity in this case.  Although when I explained my plan to the boys at Rob Assinks’, Yamaha where I spent my spare time bike-slutting they looked at me a bit strangely.

In preparation for the race and adding to the further neglect of my studies I increased the time spent riding in the scrub.  A friend of mine at college owned a YZ250 so together we purloined another blokes Subaru Brumby one weekend and went out to the Pine Rivers track on the North side of Brisbane for a practise.

To say we were “keen” would be an understatement, on the first lap my mate washed out on a high speed sweeper wrapping the handlebars onto the tank of the YZ and taking most of the bark off his forearm.  I went one better than him, after just one sighting lap I opened up the throttle on the old TT and let her rip.  The track owners’ son and a couple of mates had just finished rebuilding the track and were sitting on the tractor having a yarn, beside them was a freshly built six foot high mound.  Now this mound wasn’t meant to be a jump as it had no landing ramp, I assume it was meant to be rolled.  Anyway at the time I must have imagined it was a table top or something because with an adrenalin fuelled rush of blood I hit that thing full noise in third on the old TT and launched into the lower ionosphere.

We all know that butterfly feeling in the stomach when we hit a jump too fast.  I remember looking down at the tractor roof and the slack jaws below me, and then the big girl came down like the flightless pig it was with a valve bouncing, over-revving, tooth rattling whump!  A six inch divot was gouged into the rock hard clay by the engine cases and the front hub exploded on impact.  I wobbled to a stop and waited for the numbness to leave my feet as old mate picked up his jaw and came running up.  He made various noises of disbelief and then asked if I was going to do it again?!?

The big night finally arrived and we rocked up to the pit event in the old brumby ute with the fat ass of the TT hanging out the back.  With a new front hub and stripped of all road going gear it was fully worked with a front number plate made from the lid of an ice cream container I’d scavenged from behind the college kitchen.  My allocated racing number 5 adorned it in big custom painted letters (I must have been the fifth competitor to send my entry in).  Boy it looked trick!

Thirty one riders were entered in the support class so there were two qualifiers, I was in the second qualifier and on the gate the drone of my weapon couldn’t be heard over the scream of two strokes.  Down goes the gate and by the end of the start the TT was a good five metres behind the pack.  As the pack swept into the first corner and drifted wide I snuck around the inside and come out in third place!  I’m sure the TT and I got the biggest cheers of the night from the crowd as the big TT wallowed around the track; a Mexican wave of rubbish, beer and small children were being tossed into the air we rode past.

Five laps later and I had qualified for the main.  Two riders had got by, both of them over double jumps which the big girl just didn’t have the guts to launch over.  The first turn of the main event didn’t go as well and after ten laps and a small off I was relegated me to just outside the top ten, but you know what?  I didn’t care!  The scoffers had been silenced and in the face of adversity my old TT and I had shone brightly, if briefly.  I still wonder what people thought of it all when they saw that old TT wallowing around the track, it would be nice to one day meet someone who was there that night.  It is one of my very few tales of glory and is something I can always look back on and treasure.  What is your tale?